The 5th of July was an important day for our Lumber Riverkeeper and the communities in Robeson County, NC…that was the day that Dominion Energy and Duke Energy announced that they were canceling their plans for the Atlantic Coast Pipeline. The ACP, a natural gas (methane) pipeline, was planned to stretch from West Virginia, through Virginia into North Carolina with its terminus in Robeson County, in the Lumbee community of Prospect. 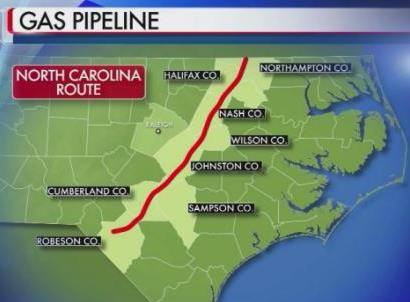 We first became aware of the proposed ACP in 2014 while challenging efforts by Duke Progress Energy to leave in place the toxic coal ash from the former Weatherspoon plant in Lumberton on the Lumber River. We attended an Open House hosted by Dominion Energy to inform the community about the pipeline. That meeting launched our involvement in opposing the ACP in partnership with community leaders in Robeson County and many other advocacy organizations in the state.

With our many partners, we showed up, stood up, and spoke up multiple times at multiple locations to:

– attend public information sessions, public hearings, and public listening sessions and launch a pipeline watch group with our NC Waterkeeper colleagues
– comment on the inadequacy of a number of state-required and federally-required permit applications
– speak with local and state officials about our concerns
– demand reform of the Federal Energy Regulatory Commission
– challenge the adequacy of the ACP’s federally required Environmental Impact Statement
– launch legal challenges opposing the ACP with our partner, Southern Environmental Law Center

We never wavered in our position that Dominion/Duke’s methane gas pipeline was risky and unnecessary. Our concerns in Robeson County focused on the environmental injustices this proposed pipeline would have on the waterways and the diverse communities that call the Lumber River watershed their home. Our commitment came to fruition on July 5th when the official announcement was made that the ACP was canceled. 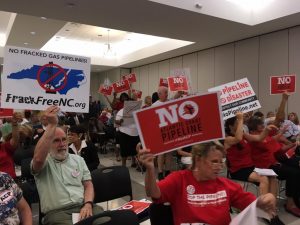 While we celebrate, we realize that our fight isn’t yet over.

We continue to oppose Piedmont’s Liquefied Natural Gas (LNG) facility that we believe was intended to serve the ACP, storing excess gas in liquid form when demand was low. As a partner to the ACP, we’re not sure what Piedmont plans to do but we will continue to investigate.

We’re also concerned about those landowners who were subject to eminent domain along the ACP route in Robeson County…we can’t abandon them so we’ll stay involved.

Dominion Energy is potentially part of SC’s energy future, having intended to connect to the ACP at its terminus in Prospect and with proposals to include natural gas-fired generating stations in SC. Not renewable energy!

Finally, we continue to oppose Piedmont Natural Gas’ Robeson Liquefied Natural Gas (LNG) facility and associated Robeson LNG Pipeline Project that we believe was intended to serve the ACP. As Duke/Piedmont push forward with these unnecessary projects, we are pushing back.

On July 13, 2020, Lumber Riverkeeper and Friends of the Earth forwarded a letter to the US Army Corps of Engineers demanding they send a written stop-work order to Piedmont Natural Gas concerning the Robeson LNG Pipeline Project. There is no valid authorization to continue the project under section 404 of the Clean Water Act after courts vacated the Nationwide Permit 12 that is used to cross waters when constructing pipelines. Our fight continues.