The latest on our fight against fossil fuels and the pollution they create for our waterways, our communities and our climate…

On July 5th, 2020, we celebrated the news from Dominion Energy and Duke Energy that the proposed Atlantic Coast Pipeline was canceled! Read our blog here>>

We are elated that the [Atlantic Coast Pipeline] is no more, but in the Lumber River Watershed we are still fighting Piedmont Natural Gas’ proposed Robeson Liquefied Natural Gas Project and Pipeline, an unnecessary and dangerous project that would pollute our waterways, while destroying more of the valuable wetlands we need to help control flooding from increased extreme weather events. We hope that these high profile pipeline decisions help shed light on some of these lesser known (but equally dangerous) natural gas infrastructure projects.” – Jefferson Currie II, Lumber Riverkeeper

Our fight against the risky and unnecessary Atlantic Coast Pipeline began in 2014 and finally ended July 5th, 2020. During those 6 long years, we showed up, stood up and spoke up multiple times at multiple locations to:

Thank you to all our advocacy partners for the successful fight to STOP THE ACP!

We are concerned about these proposed rules. We have heard it said that these rules are meant to combine the tightest provisions of the federal CCR (Coal Combustion Residuals) rule and existing state rules but, from our review, that does not seem to be the case. Many of the key federal provisions appear to have been watered down, reflecting rollback efforts at the federal level under the current EPA Administrator.

Here are some of our key comments:

For the only Duke coal ash impoundment in the NC portion of our watershed on the Lumber River near Lumberton, its coal ash is currently being excavated and removed to a recycling facility, a victory for the community and for us. This is very good news, even more so now since Duke released its report about radioactivity levels at many of its coal ash sites in the Carolinas, including the Weatherspoon facility. Because of our and our partners’ efforts, Duke has released important emergency information about its coal ash sites, including at Weatherspoon. Check out Duke’s statement here.

Swimming Upstream: The State of North Carolina’s Waters is the first comprehensive report on that details the work of Riverkeepers across North Carolina. This state has a proud history of environmental protection. However, 2016 was a year of vast devastation and increased pollution, from storms, the burgeoning hog and chicken industries, coal ash and other chemicals and abuses. Contributing to the problem were environmental officials who turned a blind eye to the problems and were slow to respond to issues. Combine this with State government that attempted to roll back protections and you have a state where Riverkeepers had to work harder than ever to protect our waters.

Working with our partners, we have been and continue to be focused on ensuring excavation of coal ash buried in waste impoundments, many of which leak directly into rivers, lakes, and streams and frequently into the aquifers that supply drinking water systems. Loaded with toxic heavy metals like arsenic, mercury, selenium, and lead, this waste pollutes our public waters and causes community health concerns.

Within the greater Winyah Bay watershed, we are focused on the following facilities:

Santee Cooper is expediting the ash removal at Grainger with plans to have it completed by the end of 2018! They will accomplish this by a combination of continued beneficial reuse and by using the class 3 landfill at Santee Cooper’s Cross facility.

In 2013, as a result of a settlement agreement between parties to a lawsuit brought by Southern Environmental Law Center on behalf of the Waccamaw RIVERKEEPER® and other partners, Santee Cooper agreed to fully excavate the coal ash at the former Grainger facility and to recycle the materials. The coal ash is currently being excavated and trucked to a SC recycling facility and is ahead of the schedule agreed upon in the settlement. We remain watchful over the process but recognize that this was and is a great victory for the Waccamaw River and all the communities that rely on it! 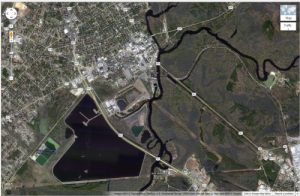 In the case of Duke’s Robinson facility, we are working with our partners to ensure a similar result. Duke has announced that it plans to fully excavate the coal ash at this site and remove it to an on-site landfill.  We are awaiting further information to enable our review and to provide comments on the closure plan.

In December 2016, we provided comment on the draft wastewater and draft stormwater permits for this coal ash impoundment, asking for more stringent requirements to protect the Lumber River and the communities that rely on it, while we await activities associated with the excavation and removal of coal ash permanently from this site. We recently learned that Weatherspoon will not be the site of the 3rd reprocessing center, as was suggested in the Fall 2016 press release for the revised draft permits for stormwater and wastewater.  That’s good news since we argued that, while reprocessing is a good thing to avoid landfilling of coal ash and supply raw material for the concrete industry, any reprocessing should take place closer to a larger source of coal ash, i.e., where there are more and larger coal ash impoundments as compared to Weatherspoon.

Regarding Duke’s Weatherspoon facility, we are pleased to announce that the 1.7 million tons of coal ash sitting in an unlined pit in the wetlands of the Lumber River will be excavated and removed. In June 2015, Duke announced that it plans to fully excavate the coal ash at this site; however, the NC Department of Environmental Quality (NCDEQ) challenged this decision. It issued a report at the end of 2015 providing draft hazard classifications for all 14 coal ash sites in NC. The draft classification for Weatherspoon coal ash is ‘intermediate” hazard which, if confirmed, would have required excavation and removal of the coal ash to safe, dry, lined storage by December 31, 2024 at the latest.  NCDEQ solicited public comments at a March 10th public hearing in Lumberton and by mail / e-mail through April 18th. It has stated that the information obtained through this public participation process will be used to finalize the draft hazard classification for Weatherspoon’s coal ash.

While since then, there has been much discussion about the process for all of Duke’s NC coal ash pits, we are assured of cleanup at Weatherspoon because the state court had already ordered cleanup there; however, it might take until August 1, 2028 to do so. Unfortunately that means continuing groundwater and surface water pollution to Jacob Swamp and the Lumber River for many more years! Twelve more years of pollution of NOT protective of clean water or the communities that rely on it! 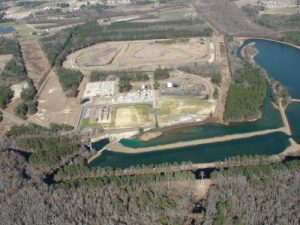 And here’s some talking points on why we are opposed to the Atlantic Coast Pipeline and its potential impact on our rivers and watersheds.

“Fracking,” or hydraulic fracturing, is the mining of natural gas by injecting toxic chemicals, sand, and millions of gallons of water under high pressure directly into shale formations. This toxic brew of many chemicals, many not disclosed to regulators, is then extracted or leaked to the surface along with the gas.

We are also working on the proposed Atlantic Coast Pipeline.  If approved by the Federal Energy Regulatory Commission (FERC), the ACP would carry natural gas from hydraulic fracturing operations in West Virginia, Ohio and Pennsylvania through Virginia and into North Carolina, terminating near Pembroke in Robeson County with plans to link another pipeline from Pembroke (the Prospect area) to Duke’s Smith Energy Complex in Halmet, NC.

Together with our partners, we are working to raise community awareness and action regarding the Atlantic Coast Pipeline. Our alliance partners agree that the ACP is unnecessary and that we need to hold FERC accountable for its inadequate determination of need for this and other pipelines being built across the country.  We also agree that the ACP will irrevocably damage communities, both human and natural, along its route. Together we are working to stop the ACP before it’s too late!

Within North Carolina, the geologic formations with potential natural gas include the Deep River Basin – Wadesboro Subbasin which has the potential to impact the PeeDee River watershed and the Cumberland-Marlboro Basin (unassessed) which has the potential to impact the Lumber River watershed. We are opposed to shale gas extraction by hydrofracking unless, and until, the industry proves it can be done safely to protect human health and the environment. And the good news is that, at least for now and to our knowledge, efforts to extract any shale gas from North Carolina has been suspended. However we remain a partner of FrackFreeNC to stay vigilant on the potential for fracking and the impacts to our communities, both human and natural. 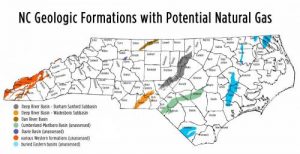 We are also opposed to the proposed Atlantic Coast Pipeline which, if approved by FERC, will carry natural gas from hydraulic fracturing operations in West Virginia, Ohio and Pennsylvania through Virginia and into North Carolina, terminating near Pembroke in Robeson County with plans to link another pipeline from Pembroke (the Prospect area) to Duke’s Smith Energy Complex in Halmet, NC. 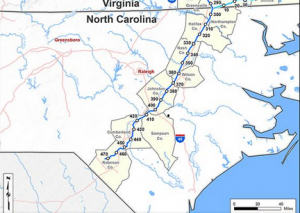