Piedmont Natural Gas says that the rate increase will be used to pay for infrastructure, and although the timing and cost estimates are suspiciously close to the figures for PNG’s currently proposed Robeson Liquefied Natural Gas facility (Robeson LNG) to be located in the Wakulla Community in western Robeson County, PNG says that this rate hike won’t be used to pay for that polluting and dangerous facility. Designed to hold 1 billion cubic feet (over 18 billion gallons) of liquefied natural gas, the Robeson LNG is similar to Piedmont Natural Gas’ Huntersville LNG near Charlotte, where in 2008, PNG polluted the groundwater through their illegal on-site dumping of chemicals. Knowing PNG’s track record, the North Carolina Department of Environmental Quality is still allowing the in-state Robeson LNG to move forward without water quality or air quality permits that are a basic requirement for projects that cross state boundaries. 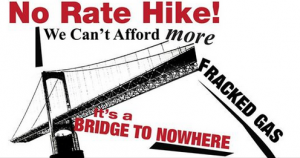 As folks in the Lumber River watershed have seen, PNG’s work updating gas transmission lines and other infrastructure has been ongoing for two years in Richmond, Scotland and Robeson Counties, while their parent company Duke Energy works on installation of the fracked gas Atlantic Coast Pipeline (ACP). Piedmont Natural Gas’ official position is that the two aren’t connected, although their plans call for connecting the proposed ACP and proposed Robeson LNG to new and existing infrastructure. According to PNG, it seems that their entire infrastructure connecting to each other is just coincidence.

We  hope that the North Carolina Utilities Commission denies PNG’s application for a rate increase. With the costs of solar energy and battery storage falling quickly, the future of our energy supply is shifting from the polluting fossil fuels that PNG is peddling to clean and renewable energy sources. PNG’s request for a rate hike is a clear step in the wrong direction for the future and the health of the Lumber River Watershed and the communities and people who live here.

For more information or to get involved, contact your Lumber Riverkeeper, Jefferson Currie, at LumberRK@winyahrivers.org.